What Does Your Stuff Say About You? 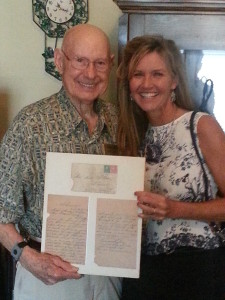 What does your stuff say about you?

Our possessions do not define who we are, but they can tell a lot about us.

I love working with people because each person has a different story. As a family transition specialist, I meet interesting people. I have to admit, I love going thru their stuff.

You learn a lot about a person by the things they keep. At age 94, Mr. H still walks tall and proud (I’m wearing heels in the pic) . He has his wits about him and he knows what he likes. We’d unpacked photos of him in his early years. He had been a very handsome young man.

His Bible, one of the last things to pack and first to be un-packed. It was well-worn and he wanted it out for easy access.

Mrs. H’s stockings nestled neatly in her shoes. Her cosmetic bag kept on the vanity. Mrs. H had passed the year before, but the shoes on her side of the bed and lipstick and blush near Mr. H’s toothbrush made him feel at home –like she wasn’t really that far away.

Mr. H was insistent that his guns come with him (empty of course – he’s 94) . Still, Mr. H wanted them near. He valued his right possess them.

A model fighter airplane was displayed safely on a high shelf. It was a replica of one he flew as a pilot in the US Air Force decades earlier.

This precious collection didn’t hold significant monetary value, but these “things” were of utmost importance to Mr. H.

I went back a few days after unpacking to see how he’d settled in. I also wanted to ask him about one other of his prized possessions.

The letter (photo) was preserved on a little white board. It intrigued me so I hoped he would share the story behind it.

When we arrived, my husband and I heard big band music streaming thru his door.

We banged on the door hoping he’d hear us. Through the trumpet sounds and some other loud noise we heard his holler, “Come on in.”

He was expecting his son, and was surprised to see me and my husband. Mr. H remembered me from the move and welcomed us in.

He was obviously frustrated. He couldn’t get his TV to turn off with his remote. With an aggravated thrust, he pointed it towards the TV that competed with the sounds of the music.

Brad figured it out, while I explained that I’d enjoyed helping him a few days earlier and wanted to see how he was doing. The noise subsided.

He looked at Brad and gave him a quick nod, “Well now that my remote is fixed I’m doing better.”

I couldn’t resist, “Mr. H, I’m curious about your letter.”

“My letter?” He looked puzzled.

“Yeh, the one you have mounted.” I picked it up from a shelf and handed it to him.

He held it, smiled and proudly told the story.

It was written by his father to his mother;

His vision was not so good so we took turns reading it:

I just wanted to drop you a few lines to tell you that I certainly was glad to get to have the pleasure of being in your company Sunday night, and if you have no objection I would like to call at your house some time to see you

-providing I don’t leave town pretty soon… Say be sure to be at church next Sunday night will you? Gee girl I think you’re a peach. Sure wish I could take a bite ‘a peach…!!

He was called to duty days after penning this first of many love letters.

Mr. H lit up sharing the story though his eyes looked off beyond the room we sat in.

“Dad went and served. Mom waited for him. He fought and he made it back.”

He paused and smiled, looking back at us.

“Well you can figure the rest. They got married and had me!”

His eyes trailed off again, but this time he looked to the black and white photo of Mrs.H.

Mrs. H had passed the year before. But his love for her was fresh. Keepsakes scattered around his apartment reminded him that one day he would be with her again.

In Mr. H, I found an admirable story. He didn’t boast a word, but his “stuff” told the story of his values and allegiance;

We all have our stories, and often they’re connected to things.

What do your things reveal about you?

What stories have been passed down to you? And what stories are you passing along to others?

More then our stuff, our lives tell a story. We get to fill in the pages.

One way or another we all pass along a story. What is yours?