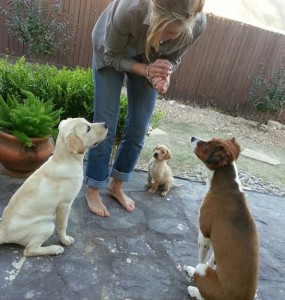 There’s such a distinct difference between retrievers and shepherds.

We didn’t realized just how obvious this was until we had both in the same home.

Our sweet Aussie has always been a “herder”, tirelessly corralling people, animals and anything that moves.   She guards and protects.  Riley is our alarm service.  If a fly burps, she barks to shush it into submission. She instinctively wants everything to be in its right place.

The labs on the other hand don’t seem to care where anything is or what is going on.  They just have to be in the center of whatever is going on.

The differences are especially apparent when they play.  Throw a ball to Riley and she jets off in a flash to get it.  She’s possessive and can’t seem to let go.  It’s as if she’s charged to take care of the possession and wouldn’t dare relinquish her responsibility.  She’s a control freak.

Throw a ball to Jack or Piper and they can’t wait to scoop it up and bring it back so you can throw it again and again.  They truly love to play.

Seeing this, I thought about differences in people.  We all serve in our own unique way.  Everyone has their own natural “bend”.  Like Riley, some are excellent at rounding others up; keeping them in line and making sure things get done and get done right.  These seem to have a bigger picture and know how to run things.  Task oriented achievers.  They are responsible and loyal to the charge (and help make the world go round).

Others want to PLAY, making everything a GAME.  The goal is not their objective so much as who they will get to be with as they go about getting the goal done.  These folks seem to be more at ease, though their opposites may see them as irresponsible.

I found myself “judging” our Aussie (pretty sad when you judge a DOG!).  It annoys me to no end when Riley runs after the ball and keeps it, while the pups bring it back every the time.  You’d think all the praise she sees the pups getting would entice her to do the same.  Nope.  Ain’t happening…  Especially if it’s her red bone. It cracks me up to see the differences in the physical attributes of labs and aussies.  When our aussie Riley runs, she appears to be fluid; a steady stream of black, brown and white pouring over terrain. Given good space to openly run at full speed, she takes my breath away.  She was made for speed and efficiency.  She’s sleek and agile.  It’s a great show of magnificent design watch her run.

Our labs on the other hand… They do run, and grant it they are still pups, but their runs are floppy, bouncy erratic spurts.  I’m reminded of the old steel spring rocking horses in playgrounds, bobbing about in all directions not really going anywhere efficiently.  They are ridiculously fun to watch.

We have a baby gate to section off a carpet free area for the pups.  Riley leaps back and forth over it effortlessly while we humans awkwardly hoist our legs to get over.

And the labs?  Though Piper is tall enough, she simply isn’t designed to make those long, high stretch leaps.

Again I’m reminded of the differences of man.  We’re all SO different.  One can only imagine the joy God has in appreciating the unique qualities and quirks He’s wired into each living thing.

I am in total agreement with King David of old, “O Lord how great are Thy works!”

Be sure to take time today to look around and appreciate the magnificent works God has done.