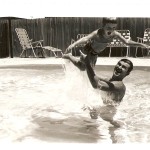 The other day I called my Dad to wish him a Happy Birthday.  It was the perfect opportunity to tell him what had been burning in my chest for a while.

I shared with my Dad about the time long ago when he and mom had were working out the details of their divorce.  I was 8, the oldest of the 3 kids.  Mom would take custody of my little brother and sister, but I was given the option of picking which parent I would live with.

I had been torn about the decision.  I loved both parents, but wanted to live with my dad.   I knew mom would need my help caring for my brother and sister.  It was hard enough that our parents were splitting.  It would have been too much to break up the siblings on top of that.  In addition, how could I “pick” one parent over another without hurting one?

I decided to go with mom, choosing unity over personal desire.  It seemed unfair that I had to make the kind of decision my parents were unwilling to make themselves.

Though I really wanted to be with my dad, there was no point in voicing it.  I knew it would only hurt my mom, and further break my dad’s already bruised heart.

The longing to stay with my dad didn’t change over the years.

Decades later, as an adult with kids of my own, I see things clearer.  Enough time and healing have passed that I could safely talk about it with Dad.

Sharing this with my Dad turned out to be more for me.  He told me he had sought legal advice to get custody of us.  Having met with one lawyer after another, he found what we all know; that unless the mother is found to be incapable, the court would always defer custody to the mother.  Don’t get me wrong, I loved my mom.  Still, I wanted to be with Dad.

Dad had not wanted to put us thru more drama.  He said it really wouldn’t have worked for me to go with him anyways.  Ultimately, us children needed to be together, to preserve as much “family” as possible.

For decades, I had perceived that my Dad gave up too easily on me.  Then, in one conversation, I realized he did what he believed we needed most at that time

There’s two things I took from this.

1.  A reminder that divorce is far more costly than most will count the price of.

Parents, before entertaining thoughts of divorce, consider the long lasting affects it would have on your children.

2.  Share what is in your heart as soon as it’s a proper time.  You never know how much life you’ll bring to the person you share it with!