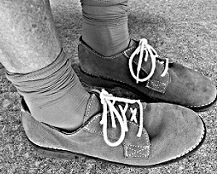 I remember the day I dressed up for a party that wasn’t a costume party; on purpose.  It was back in the early years when we lived in Huntington Beach, California.  My husband, Brad, worked at a computer account in downtown LA, and I was a young stay home mom with our first child Jake.

Our neighbors, Jack and Sunny, had invited us to an evening party.  I’m pretty sure it was St. Patty’s day.  “You guys should come.  It’ll be fun.”  We knew it would be.  Jack and Sunny always did things top rate.

We’d planned on going, though we were a little intimidated as the young ones on the block.  Jack was a handsome, successful contractor on his second marriage to a beautiful and bubbly, but intelligent younger woman.  Sunny’s signature was her brightly colored lipstick and laugh.  She laughed a lot but it wasn’t nervous laughter; she was just happy.

They’d befriended us taking us under their wing by helping on occasion with Jake. Sunny would say she wanted her “baby fix”.  They got us out of the apartment and drew us back into the fun of life.

The party promised to be entertaining, though we wouldn’t know anyone beyond Jack and Sunny.  With Brad at my side and Jake on my hip, we’d blend into the crowd nicely.

Unfortunately, Brad’s account had a problem that kept him after hours.  By the time he got home, it was late and he was exhausted.  Socializing was not his cup of tea anyways.  I didn’t feel comfortable going solo and thought it strange to go alone with a baby.  Besides, Jake had finally gotten on to a routine and I didn’t want to disrupt his schedule.

Jake was down for the night and I kept thinking about the party.  I wasn’t tired, but I was bored.  I wanted to get out.  I remembered the old hag mask we’d gotten at a costume shop in Long Beach. It was on sale after Halloween and we thought we’d use it for next year’s neighborhood party.  “Hey Brad, I think I’m gonna go to the party after all.”

“Really?” he’d just changed, checked on Jake sleeping in his crib, and was settling in on the couch.

I went into the bedroom and found the old rain coat that had been Brad’s dads.  I donned a pair of knee high hoes and the mask.  I carefully tucked my hair under the hag’s scarf attached to the mask.  I put on a pair of oxford shoes with the knee highs rolled down.  I walked in front of the full length mirror dragging my foot with a hitch in my step.  Yeh, this’ll work.

I emerged out of the bedroom and tried on a crackly old woman voice, “Well hello there young man.  So you’re gonna let this old lady go to a party herself are ya now?”

One eye squinting, the other raised, he turned towards me with a look of question.  In a second he was falling off the couch laughing.  “What are you doing?!”

I advanced toward him in a slow shuffle, working my hitch.  “Well now honey, it would appear that I’m a goin to a party now wouldn’t it?”

I wanted to laugh but kept the act up.  “You sure you wanna let this hot thing go it alone?”   I cocked my head and poked his side.

“Don’t pucker up just yet.  You can kiss me all you want when I get home.”

I lifted the rain coat revealing a knee.  Loosing the crackly voice, “I’ll even take off  the coat.”

I limped the short walk around the block to Jack and Sunny’s practicing my little hitch.

You could hear music and laughter a few houses before there house.  I stepped up 3 steps to the door; butterflies rose in my stomach.

A man 12 years my senior opened the door with a drink in his hand.  “Hello?”

He sobered quickly, “Oh h-e-(double hockey sticks).  What have we here?”

My thoughts spit fired; “Okay, sister, game on.  You better kick it in gear or you’re really gonna look like a fool.”

Thru my nerves, excitement flickered.

Continuing in my best crackly voice, “HeLO there young man,”  “I hear there’s a PARty going on here.  Yaah mind if I come in?”

Sunny!  Where was Sunny?   I’m sure I offered a made up name, but I don’t remember what it was.

I don’t remember the “young” —older man’s name, but we’ll call him Mark.

“Mark, would you be so kind to EScort an old woman to the owners of this fine house?”  “I want Jack and Sunny to know I’m here.”  What are they gonna think?

I moved slow, exaggerating my movements to amplify affect.  The house was full.  The crowd was loud and lively.  IMusic played in the background.

We stopped a couple times as we made our way to the back patio where Jack and Sunny mingled.  Mark introduced me to his friends.  I was quick witted, surprising myself more than any one.

Once we found Jack and Sunny, they rolled with the masquerade as if they’d expected an old hag.  Jack gently took my arm and introduced me to his adult son and offered me a drink.

“Oh Jack, you know I gave up on the drinkin years ago.”  “Don’t be tempting me now.  That’s just not good manners.”

Jack leaned down, whispering to my checkered scarf “Linda?”  Linda was a neighbor 2 blocks the other direction.

I was beginning to wonder who I was as well.  “No dear, I’ll tell ya tomorrow.”  I whispered back thru the rubbery mask.  It was getting sweaty now.

“I best be getting on home.  I need all the beauty sleep I can get now-a-days don’t ya think?”

I squeezed Jack’s arm and faced Sunny. “Bye dearie, great party” she smiled but was obviously still trying to figure out who I was.

Jack asked if I needed help getting home.  “Oh I live very close.  Won’t take me long, and no one’s gonna mess with a little old lady now, will they?”

I could have gone thru the garden and garage that faced our own; above which lay our apartment.  Instead, I went to the front sidewalk, maintaining my disguise until I made it back to the alley.

Entering the alley, I removed the mask and lost my limp.  It was only five houses to the steps of our 2nd floor apartment.  I couldn’t wait to tell Brad.  Laughing, I took the steps two at a time.  I did it!

Jack and Sunny were tickled the next day when I placed Jake in Sunny’s arms and said, “He’s getting heavy now isn’t he dearie?” in my old woman voice.

Sunny laughed, “It was YOU!”  Jack winked.  We went to several more parties, but never did see the old woman again.

Looking back I’m still surprised I actually did that.  Brad was as stumped as I.  I remember feeling free as I hide beneath the costume.  I was accepted as bold and funny by the men, and a non-threat to the women.

We had that mask for years.  In fact, I’m pretty sure Jake used it in junior high.   I wish we still had it.  I’m sure I could have fun at another party.   If an old hag shows up to your party –just roll with it!