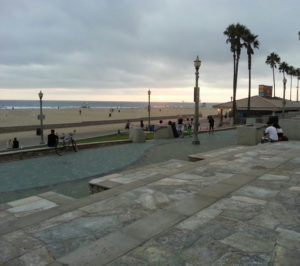 Do not neglect to show hospitality to strangers, for by this some have entertained angels without knowing it.

The post reminded me of my own unusual encounter.

Over 25 years ago I used to jog the beach path with my son in the baby jogger. Occasionally we’d pass a man who my husband and I privately called the ‘Bum of Huntington Beach’. We weren’t walking with the Lord then, and there were few vagrants roaming HB. Sometimes Brad and I saw the man walking along Goldenwest Boulevard, but more often Jake and I passed him on our runs at the beach. Every time we saw him, he piqued my curiosity. He was tall -like really tall, and though his clothes were tattered and raggedy, he possessed a strong presence. I found it odd that when we passed him, he never smelled. He walked slow, but his posture was upright. He wasn’t just confident looking. I’d actually say he was… poised, almost elegant -in a manly way. His eyes were piercing in a kind way.
There was something different about this man, and I couldn’t figure it out. I wanted to know more about him.

One Christmas morning I went for a jog before we our traditional big breakfast. There on the lonely beach was our man sitting on the sand before the shore. This was the first time I saw him sitting. He always walked.
The thought came to me, I’ll bring him breakfast!

Excited at the thought of meeting the mysterious man, I quickened my pace and took the shorter route home so I could make up a plate and get it back before he was gone again.

At home, I piled the plate high with egg soufflé, toast, and fruit; and put juice in one of Jake’s sippy cups. My family looked at me like I was nuts. But I had too. “Hurry Shell. We’re hungry.”

It’s Christmas. He needs a gift.

I had some crystals that I kept in my jewelry box (again, not walking with Jesus). I held on to the stones thinking they could somehow guide, enrich, and protect my life.

At the time, I was blind, holding on to worthless objects instead of reaching out to the true source of hope.

Laden with a big plate of Christmas breakfast, and a cup of juice. I tucked the gift in my jacket pocket and hurried back to the spot near the pier. The air was cold and damp that morning. The ‘bum’ was still there, just gazing out to the foggy sea. He had a blanket wrapped around him. It was so strange to see him sitting, but he still looked so…tall.

I crossed the bike path to the sand, awkwardly caring my gifts. As I approached the man I began second guessing my brilliant and ‘extravagant’ gift.

What if he’s crazy -or dangerous?

Maybe I’ll insult him and make him mad… What’ll he do?!

I continued thru the clinging sand, contemplating random thoughts. The beach was vacant except for a family taking a walk and a few die-hard surfers.

Now I was beside “the bum”; past the point of turning back. He looked up slowly, his eyes meeting mine. I saw gentleness and wisdom and suddenly felt incomplete in whatever I thought I had to offer. In that moment I realized this man was more than what I judged him to be by his appearance.

I scrambled for words, “Um… Sir. Uhhh…” He seemed to see right through me.

“It’s Christmas.” I offered the plate, feeling like I’d just barged in someone’s private home. Maybe I had.

He looked down at the plate.

Maybe he owns one of the beach homes and simply chooses to walk in tattered clothes.

It struck me again; he doesn’t smell. Suddenly I realized I did smell. I still had my sweaty running clothes on.

Oddly, I felt quite safe and welcome in his presence despite my embarrassment.

“Here’s some juice.” I handed him the sippy cup, painfully aware that my gift was not so extravagant after all. “That’s… you know; so it wouldn’t spill.”

Hoping to ease the awkwardness, but failing dismally; I handed him the crystals.

“A Christmas gift. Their supposed to help. Bring you luck.” I didn’t know what else to say, but he set the plate on the sand and accepted the clear stones in his hand. He simply looked at the stones unmoved.

Ahhh -what am I doing?! I’m giving a man stones?

He looked up and I wanted to run, but he met my eyes; smiled and kindly replied, “Thank you.”

He didn’t say another word, though his eyes said much. They were filled with wisdom. I could see that he had answers where I had questions. Somehow, I perceived that he knew what I wanted to know, but wasn’t ready to hear. He had answers to the hard questions of life, and he knew I wouldn’t accept them yet.

How did I know? Some things you just know -you know?

I looked down where the sand met his weathered blanket and managed, “You’re welcome.”

I wanted to stay in that unusual place. I wanted what he had but I didn’t know what it was. Very aware of my iniquity I could stand the awkwardness no longer. I stood up and began walking away, weakly mumbling, “Merry Christmas”.

I went home and ate Christmas breakfast with our little family, but instead of feeling fulfilled, I felt empty. Why? I thought I’d had such a good idea.

I had not brought a man food and gems. Rather, I left a man to sit alone on cold wet sand with useless rocks to weigh his pockets.

I gave him breakfast, stones and a sippy cup, but withheld the warmth of opening our home. And though he gave me nothing, he offered peace and warmth.

Brad and I continued to take Jake for walks and runs on the beach. I looked for the unusual stranger, but never saw him again.

That minute spent with “the bum of Huntington Beach” stirred a hunger in me that eventually led to Jesus. I didn’t recognize it then, but that man gave me a desire for peace, wisdom and kindness that could only be found in Christ.

I still look back and wonder, Who was that man? Do angels walk in tattered clothes?

Whether he was simply a wise and peaceful man or a special messenger of hope, he accomplished much with little. Twenty five years later I still think of him.

In the same way, children of God are to impact others. Some of the surest ways are those most simple;

-living in such a way that others are compelled to Christ; the ‘bum’ drew me first to himself, and ultimately (without a word) to Christ.

-being content with what we have: the ‘bum’ never appeared wanting or forlorn -his peace despite his apparent lack was exceptional, making a profound impression on me.

-showing compassion by meeting others at their point of need: the wise ‘bum’ appeared to see my need and accepted the crystals without mocking my ridiculous gift. Sometimes a person need only be seen, heard and accepted. The Holy Spirit will fill in the blanks in due time.

And you? Are others moved towards God Almighty because of what’s in you?

Do they see evidence that compels them to search that which cannot be bought, sold or contained -only given?

Kindness opens the door for truth.

Or do you think lightly of the riches of His kindness and tolerance and patience, not knowing that the kindness of God leads you to repentance?  Romans 2:4

Lord, stir in us a hunger for Your presence and satisfaction in you alone, that You would be glorified and others be drawn to You.

to whom God willed to make known what is the riches of the glory of this mystery among the Gentiles, which is Christ in you, the hope of glory. Colossians 1:27